ALL about PORTABLE power stations

What are portable power stations?

First, welcome to your source of information on and about portable power stations. Many of you may already have pocket-sized power banks such as this popular model from Anker. They are great for being light weight and able to charge smartphones and other small devices via their USB ports when you are on the go. But power banks generally have no other ports and their power outputs offer far less than that of a power station.

WHAT'S THE DIFFERENCE WITH PORTABLE GENERATORS?

Well, to begin with, it's worth indicating that power stations are not strictly "generators", as they are often referred to because they do not generate power. Instead, they are sources of electrical energy stored in a lithium battery that has been charged, which is released over time when connected to devices and appliances either in the process of  charging or powering them.

Portable generators are in the main heavy ad unwieldy. Portable power stations on the other hand are generally light in weight with some small enough to be carried in a backpack.

Another important point where power stations differ a lot from portable generators is that they cannot compare in terms of power delivery, with the latter equipped with engines and therefore able to produce lots more while there is available fuel. Conversely, portable power stations are able to use solar panels to provide what manufacturers claim as limitless power availability (provided there is plenty of sun!).

Portable power stations do not themselves pollute like portable generators and are virtually silent (though fans can be heard when they come on to cool the unit).

While advances in the battery technology continue to offer improvements and impress casual onlookers, they are still some way off before their application in portable power stations can realistically be seen as a substitute for the power supplied by gas/LPG generators, about which we review some of the best in our sister site generatorjungle. 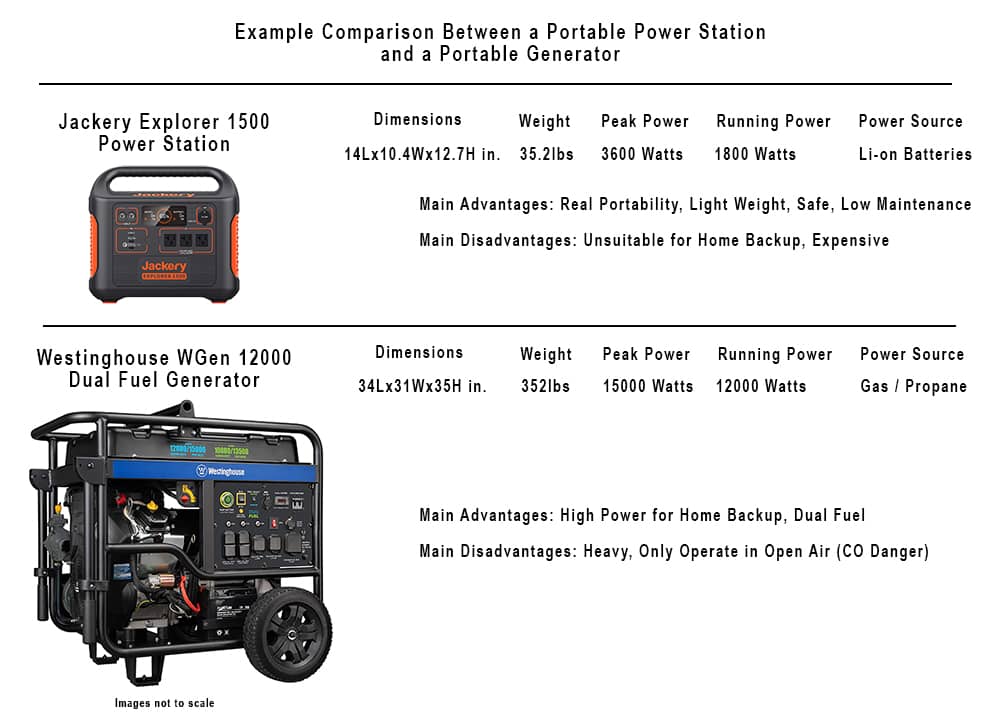 who are portable power stations for?

Well, a power station, like a portable generator, is essentially for people who want or may need an alternative or supplementary source of electrical power. It's a niche that's growing all the time, especially for outdoor activities such as camping where the limited available power is offset by the ultra-light weight and convenience these models offer.

But they also have an important place in the home, either to supplement a traditional generator or for those who live in an apartment where a gas-powered generator is simply not an option. They can also be a life-saver where people may need to depend for medical reasons on 24/7 power for, say, CPAP equipment.

So it is in this vein that we present you with a selection of what appear to be some of the best power station models on the market. We have collected information on a wide range of manufacturers. We hope that this information consolidated in one place will be of some help when you are looking for one that most suits your personal circumstances.

If you would like to read some more information about power stations, we refer you to our blog post, which goes into greater detail about what they are and how they relate to portable generators.

Power stations all produce "clean" power, much like an inverter generator, though the reference to "clean" relates specifically to power stability and not to polluting gases.

The current technology in use is basically the same in all power stations, though the type of lithium battery used can differ. Lithium-ion seems to be the most popular, possibly because this sort of battery has one of the highest  energy densities of all battery technologies. They also have no "memory effect" where frequent charging can lead to lower maximum outputs. While their energy densities are superb in relation to other technologies, they are far behind the energy density of gasoline. However, as so much emphasis is nowadays placed on the environment, lithium-ion battery technology is being used more and more to substitute gasoline and power electric vehicles such the Tesla.

But it's not all a rosy picture. They can in certain rare circumstances overheat, and high voltages can cause damage. There have been a few, but high profile, incidents such as the Samsung Galaxy Note 7 smartphone, where a defective battery manufacturing process caused thermal runaway and overheating that resulted in combustion.

LiFeP04 is another type of lithium battery which is more stable chemically and is therefore regarded by some people as a relatively safer option. A small downside to this kind of battery is that it is less energy dense. This basically means the battery has to be larger to store the same amount of energy as some other types of lithium batteries.

Power stations share some of the terminology with portable generators. For instance, you will come across "surge/peak", "starting" and "running/continuous watts". Surge/peak/starting watts relate to a device’s ability to handle a momentary increase in power required, for example, to start motor-driven/compressor appliances. Running/continuous watts on the other hand are how much power the device can deliver continuously as the battery gradually discharges.

Regulated 12V is also often mentioned as a feature. A regulated outlet means the voltage is designed to remain stable in use at the declared voltage even as the battery discharges.

When buying a power station you won't need to think as hard about the kind of accessories needed if you were buying a portable generator as there is no question, for example, about fuel storage. But in order to get the best out of a portable power station you will need to consider getting essential items such as solar panels and solar extensions. In addition, fire alarms, first aid equipment and fire extinguishers are the kind of things you will want to have on hand anyway.