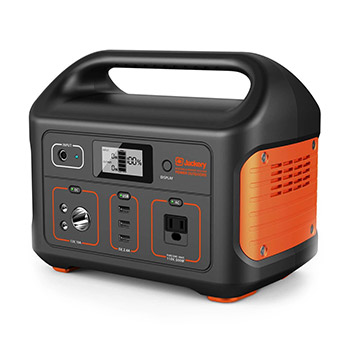 Portable power stations perform a similar function to portable generators to the extent that they both provide you with a means of access to electric power, either on the move or when for whatever reason access to the grid has become unavailable.

UPDATE: Though nothing is yet certain as of 24 September 2021, it looks like there is an attempt to try to introduce a bill in California that would ban machinery using small engines, and that includes gas-powered portable generators. If signed into law by Governor Newson, the ban on these generators could come into effect from 1 January 2024. The reason for the ban is that this type of machinery emits more pollution than cars, and that consumers should move more towards units such as portable power stations.

FOX26NEWS has more information on this topic.

FURTHER UPDATE: Since the above news California regulators voted on 9 December 2021 to ban the sale of new gas-powered leaf blowers and lawn mowers starting in 2024 and portable generators by 2028. This follows Governor Newson's signature of legislation the previous October aimed at achieving a carbon-free economy in California.

How are portable power stations different to portable generators?

Portable power stations use rechargeable (lithium) batteries in which they store electrical energy as a result of charging, for example from a wall outlet or with the aid of solar panels. A portable generator, on the other hand, uses an engine powered by gasoline, propane and sometimes diesel to generate and output electrical energy on the fly, and continues to do so as long as the engine is running.

There are of course other differences: power stations are very limited in what they can power when compared to a portable generator; watt for watt they are more expensive than portable generators; they are to all intents and purposes silent; they can lay much more claim to the definition of "portable"; and they can be safely used indoors because they do not produce dangerous carbon monoxide gases that portable generators emit while running.

What are the pros and cons of portable power stations?

First let us look at the negatives of a portable generator.

Quite a lot of people who live in areas prone to blackouts and who need a reserve source of electrical power find it difficult to handle portable generators, sometimes because of their size and weight, and other times because they may be hard to get going. They may also be worried about the dangers of carbon monoxide poisoning and of storing fuels, as well as the legal requirements for doing so safely.

Those who live in apartments will generally not be able to own and use a portable generator, not only because of the risks of fire but also because of the dangers of carbon monoxide poisoning.

Reasons why you should buy a portable power station

On the other hand, portable power stations are small and take up little space for storage. They are basically maintenance-free, deliver clean power, and are relatively light so moving them around is easy. And they are virtually silent with perhaps just a cooling fan being the only audible sound.

These positive aspects may mean that portable power stations are a more appropriate option for some people who need to ensure they have a means to access backup power during times of emergency or power outages, even though it may be relatively limited.

Where power stations shine most though is in the field of recreation for the most part owing to their reduced size and weight. This is further enhanced by their ability to be recharged by your vehicle or by solar panels when out on the road. Extra batteries can, of course, be carried too.

Among their less positive points are that the more “powerful” models can be quite to very expensive. They need to be kept charged up and last for only a relatively short period of time as the batteries discharge at a rate related to what is connected. However, this can be partially offset by using one or more solar panels which will extend the available time, and potentially even offer limitless power.

Where portable power stations cannot compete with portable generators is in their power outputs. While some of the bigger ones have a peak (surge) power of over 4000 watts, their continuous (running) power output will rarely be above 2000 watts. That said, for some people who for one reason or another are unable to use a portable generator, it may be the only viable alternative to having at least some electrical power on hand when the grid is down. Furthermore, there is evidence to strongly suggest that most people change their normal behavior when faced with an emergency and prioritize their use of equipment to essential needs only, meaning that power needs are much less.

For those wondering whether they can take their portable power stations on a plane, the answer is most likely to be no because they contain lithium batteries.  If you want to learn more about this subject, the passage of lithium batteries is governed in the US by the Federal Aviation Administration (FAA), about which you can read here.

Portable power stations rely on lithium batteries and a technology (MMPT or PWM) that uses a mix of software and electronic hardware to maximize the use of energy. Some of these batteries are based on lithium-ion technology, which has an advantage of being energy dense, and others LiFePO4.

LiFePO4 is just another type of lithium-ion, but because of its chemical composition it has a lower energy density. The term energy density is the technical term which refers to the amount of energy that can be stored in a given space.

However, while it may be less energy dense, LiFePO4 has an advantage in that it is made from lithium iron phosphate which is acknowledged to be much safer than lithium-ion. Lithium-ion came more to the public's attention, and gained notoriety, as a result of the exploding batteries in the Samsung Galaxy Note 7 smartphone, mentioned in this article from 2016.

Batteries containing LiFePO4 technology also has a greater life cycle in terms of the number of times they can be charged (one life cycle is being charged to 100% and discharged to 0%).

Who makes portable power stations and where are they made?

There is a multitude of brands on the market today, but not many of them seem to be involved in the actual manufacture of portable power stations. As is the case with portable generators, it's not easy to discover where the various brands emanate from. Some may be assembled in the US from imported parts, but it looks like a lot of the models are in fact made in China, which is not necessarily a bad thing. To take just one example, EcoFlow, which distributes some high end power stations, appears have its models made by Shenzen Ecofow Technology of China. Other than that, the relationship is unclear. For example, although the Chinese company doesn’t appear to have a website, company information on the web rather oddly doesn’t list the US as one of its markets. Another extremely popular brand, Jackery, also appears to have its power stations made in China, as is the case of the successful start-up Bluetti.

Although the energy capture and storage technology is in its relative infancy, there are strong signals that it will play an increasingly important role in the future of electrical energy distribution up to and including towns and cities. As of now, Tesla and other big names are investing huge amounts in new technologies because they know the payoff will be enormous for whoever is the first to develop the best and most commercially viable product. It is an exciting technology with far reaching implications, though many announced breakthroughs have not until now made it to economic production. Having said that, it's only a matter of time before we see startling progress.

We have written a bit more about the subject of energy capture here if you are interested.

There is little doubt that portable power stations will have a growing place in the market as weather patterns change and utility companies run into difficulties in maintaining a fail-safe grid, as is the case in the US. Although they can only discharge limited power, the fact that you can use solar energy to recharge them does mean that they can be truly independent sources of energy for a whole range of uses.

Review of the Rockpals RockPower 1300W

By Chris on January 22, 2023
- At A Glance - 1300W - 2000W (Peak) It's Rockpals most powerful portable power station designed for a wide range of uses in and out of the home. LiFePO4 Technology Comes with new LiFePO4 battery technology lasting up to 2000 Cycles at 80% depth of discharge. 5 Recharge Methods A combination of ways to recharge makes […]
Read more

By Mike Poole on June 21, 2022
- At A Glance - Max 500W Output A 778Wh Lithium battery delivers 500W of clean and steady output power. Charge 11 Devices A comprehensive selection of output connections provided for all your devices. High Speed Charging Excellent means to keep the power station charged up both in and out of the home. 500W OF […]
Read more

By Chris on June 19, 2022
- At A Glance - 8 Device Capability Included are a variety of outputs so you can connect up to 8 devices within its power limit. 300W of Power The 289Wh Lithium-ion battery pack outputs 300W of Pure Sine Wave continuous power. Light and Durable Weighing 9.24lbs the 523 has a durable design built to […]
Read more

By Mike Poole on June 19, 2022
- At A Glance - A Massive 1500W Power on Tap A 1228.8Wh Lithium-Phosphate LiFePO4 battery that's able to deliver a massive 1500W of clean and steady output power. 6 X Longer-Lasting LiFePO4 Tech The most advanced and longest-lasting power station you can buy today to power almost anything! Industry Leading 5-Year Warranty Outdoing most […]
Read more

Review of the Lipower PA300

By Chris on March 19, 2022
- At A Glance - 8 Device Capability A super collection of outputs is provided so you can connect up to 8 devices within its 300W limit. 300W of Power It has a 296Wh Lithium-ion battery capable of outputting 300W of continuous power and 500W peak (surge). Light and Compact Weighing just 7.1lbs and measuring […]
Read more

Review of the Lipower SOL 500

Review of the Lipower MARS-1000W

By Chris on March 16, 2022
- At A Glance - 10 Device Capability Excellent variety of outputs to connect up to10 devices within the overall 1000W limit. 1000W of Power The 1100Wh Lithium-ion battery outputs 1000W continuous and 2000W peak (surge) power. Robust Build The use of aluminum alloy in the device's construction gives you better durability. 1000W of continuous […]
Read more

Review of the FlashFish EA300

By Chris on January 5, 2022
- At A Glance - Super Portable Weighing just 6.4lbs, the FlashFish EA300 is a compact, light and very portable device. 300W of Power The 300Wh Lithium-ion battery outputs 330W continuous and 380W peak (surge) power. Touch Screen An LCD screen provides comprehensive information on the condition and status of the EA300. 330W of continuous […]
Read more

Review of the FlashFish E300

By Chris on January 3, 2022
- At A Glance - Super Portable With a weight of just 6.4lbs, the FlashFish E300 is another light and highly portable power station. 300W of Power The 300Wh Lithium-ion battery pack outputs 330W of continuous and 380W of peak (surge) power. Touch Screen An LCD screen displays vital information so you can monitor the […]
Read more

Review of the FlashFish G300

By Chris on January 2, 2022
- At A Glance - Super Portable Weighing just 5.73lbs, it's one of the lightest portable power stations around. 300W of Power The 222Wh Lithium-ion battery outputs 300W continuous and 350W peak. Durable Build Metal sides make it one of the more durable models available on the market. 300W of portable power protected by a […]
Read more

Review of the Jackery Explorer 1500